Discover the beauty of Tucson

A blend of cultures and traditions, Tucson is full of community and history. This city falls in a flat valley and is surrounded by many mountains. Visit the Saguaro National Park, the Santa Catalina Mountains, and explore what is beyond!

Tucson
A blend of cultures and traditions, Tucson is full of community and history. This city falls in a flat valley and is surrounded by many mountains. Visit the Saguaro National Park, the Santa Catalina Mountains, and explore what is beyond!
Take a self-guided tour 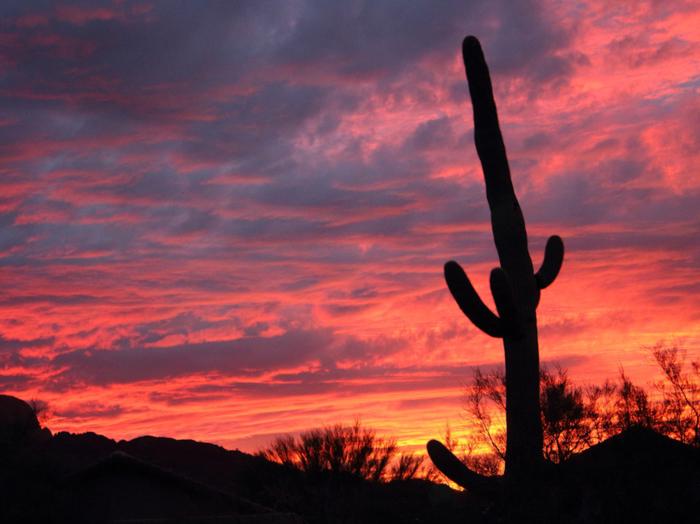 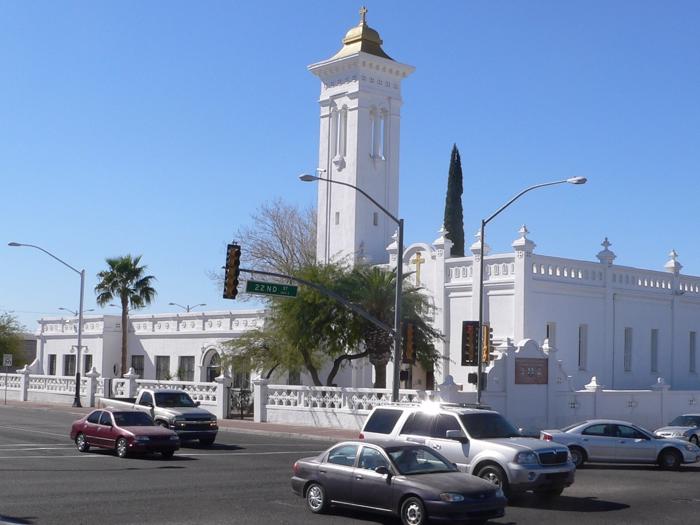 Welcome to Tucscon! Tucson is a fascinating mix of Native American cultural heritage, Spanish colonial and Mexican architecture, and the legacy of the Old West, when the town served as a post and railway station. The town itself was founded with the building of the Presidio San Augustin del Tucson in 1775, though several Native American peoples had made their home in the area prior to this time. The name of the city comes from the O'odham word Cuk Son, which means “at the base of the black mountain” in the language spoken by the Tohono O'odham people who inhabited the area when 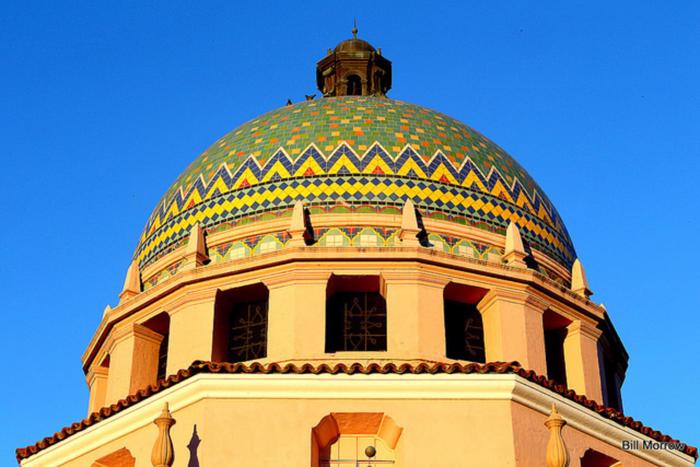 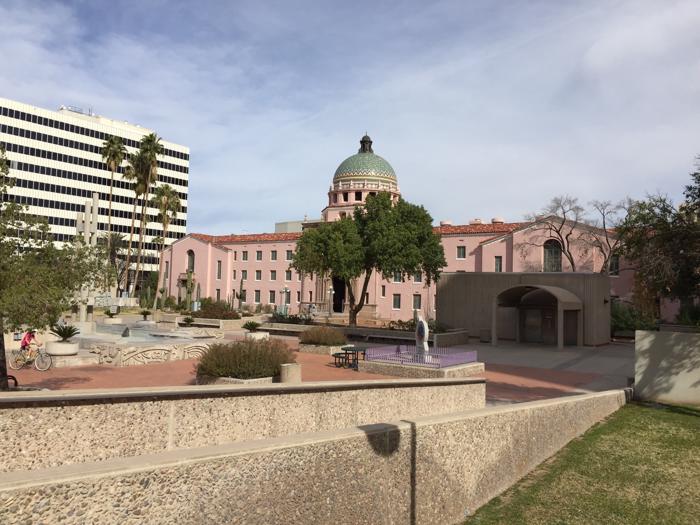 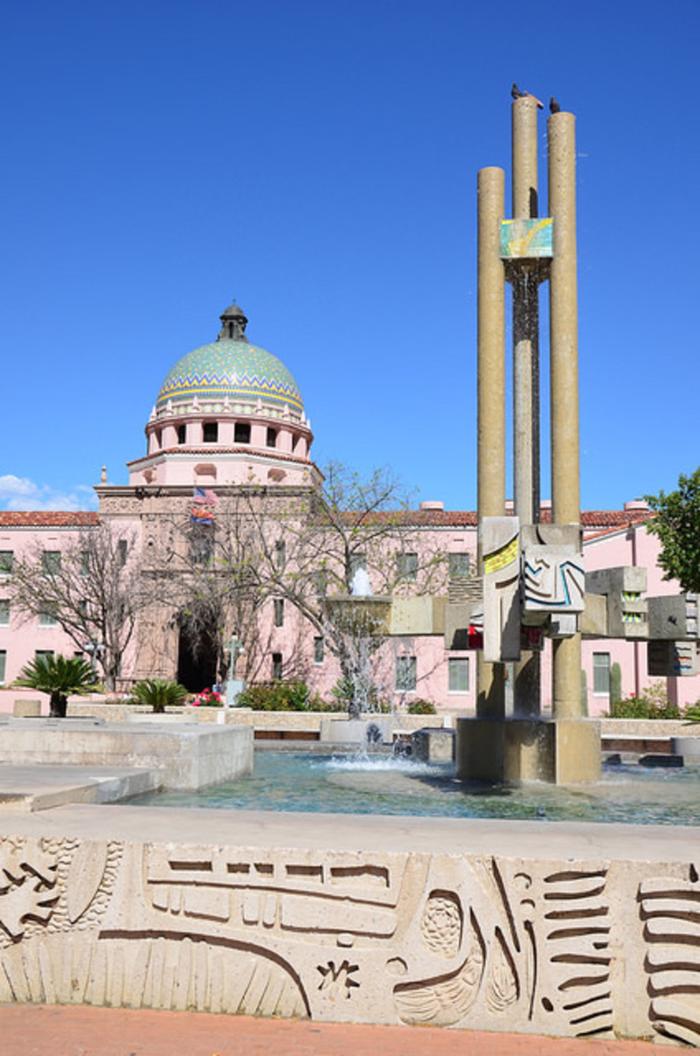 Tucson as we know it was once just a Spanish fort: the Presidio San Agustin de Tucson. This fort was the center of town as Tucson grew from an embattled Spanish outpost to a Mexican territory, then a Confederate capital, and finally, the second-largest city in the state of Arizona. On this tour, we’ll be tracing the Presidio’s original location. We’ll traverse its perimeter and see a reconstruction. We’ll also stop by military monuments and buildings that reflect the culture of Old Town Tucson. 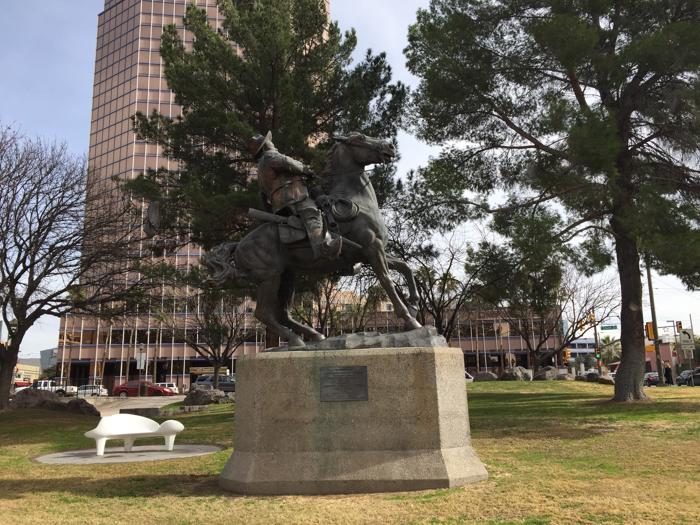 You’re now at the Allande Footbridge. It’s named after another Tucson hero: Don Pedro Allande y Saabedra. He was the first resident commander of the Presidio. Allande also funded the fort’s early construction, which started in 1776.The first Presidio wasn’t much of a strongho

We are now in El Presidio Park. As the historic marker here tells us, this square was once called the Plaza de las Armas – the Plaza of Weapons. It was the southernmost end of the fort, and the largest plaza inside the Presidio. The Spanish army conducted drills and formations here.Over the ye 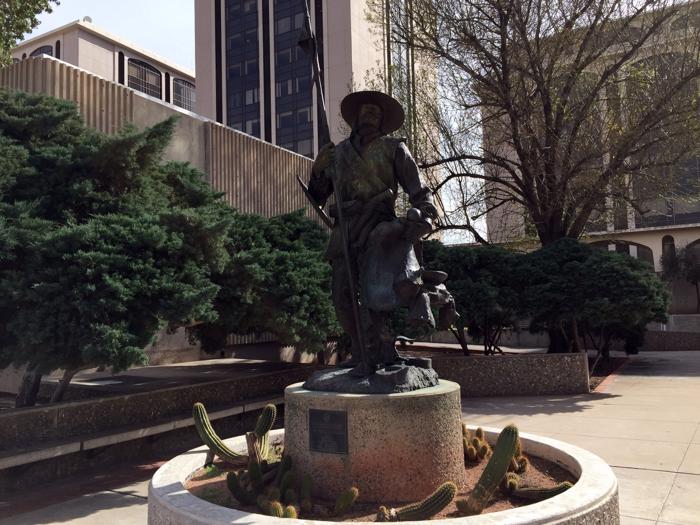 This statue of a soldado de cuera – or leather jacket soldier – shows the kind of soldier you would have seen in Tucson some 200 years ago. Fighters like him guarded the Presidio, protected settlers, escorted wagons, and explored the frontier. They lived with their families inside the fo 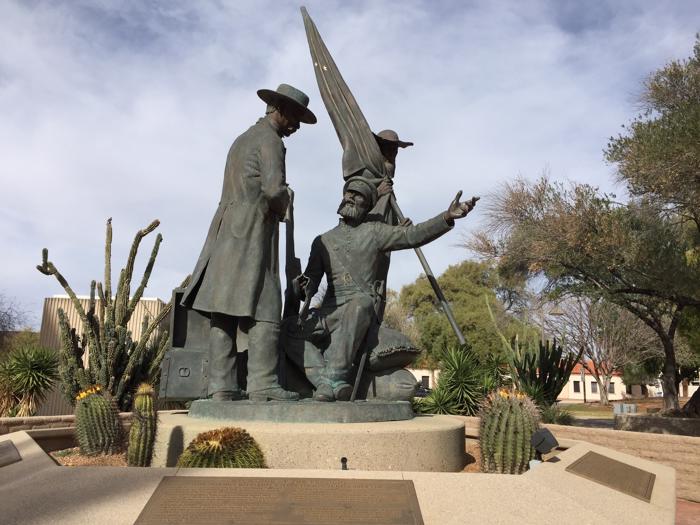 This sculpture commemorates the Mormon Battalion that passed through Tucson in 1846. The battalion briefly stayed in the Presidio on its way to California. It was slated to fight in the Mexican-American War and create a wagon trail from Santa Fe to San Diego. The company of nearly 500 men marched 2, 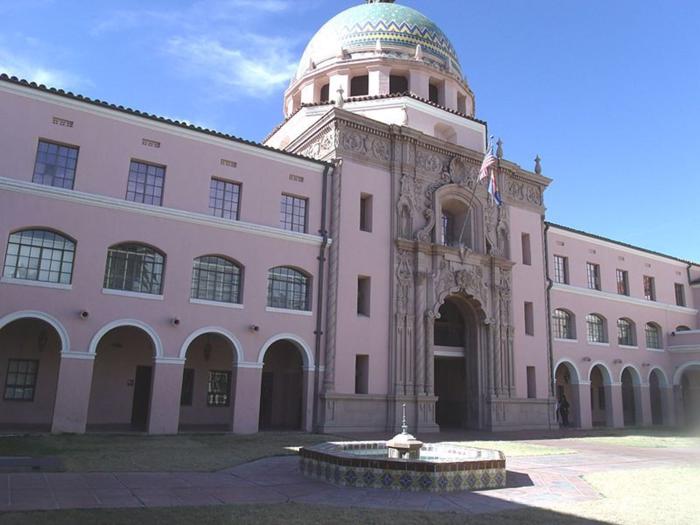 We’re right in front of the Pima County Courthouse. It was built in 1929 in Spanish Colonial Revival style. The courthouse features a beautiful mosaic tiled dome and an elegant courtyard, which we’ll be walking through. This building is actually the third courthouse built on this site &n 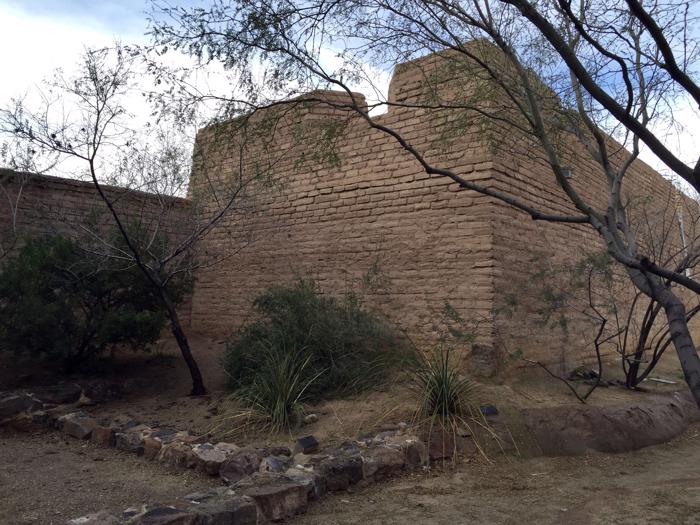 We’re right outside the reconstruction of the Presidio de San Agustin de Tucson. This site recreates the fort’s northeastern corner, as it existed on this very spot. It includes the 10-foot-high adobe walls that once ran along 11 acres of downtown Tucson. There’s also one of the tw 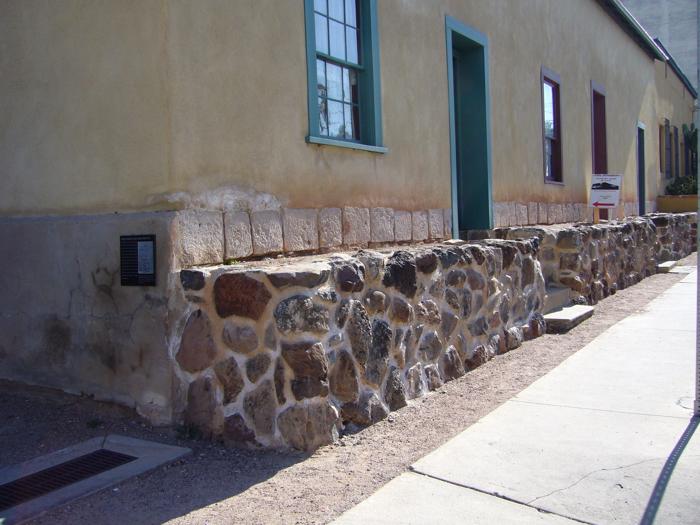 This is the Siquieros-Jácome House – a fully restored, original adobe from the 1860s, when Arizona was already a U.S. territory. It’s an example of middle-class residence and a typical Sonoran desert row house.The house is built right on the street and opens to an interior courtya 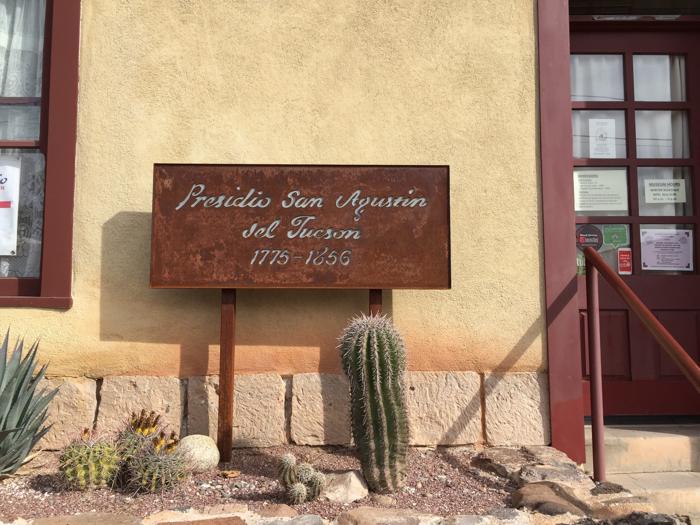 The Presidio museum shows life in Tucson from 1775, the start of the Spanish colonial period, to 1912, when Arizona became an American state.At least once a month, community volunteers hold Living History Days. They re-enact life in the Presidio and teach visitors, especially children, skills for li 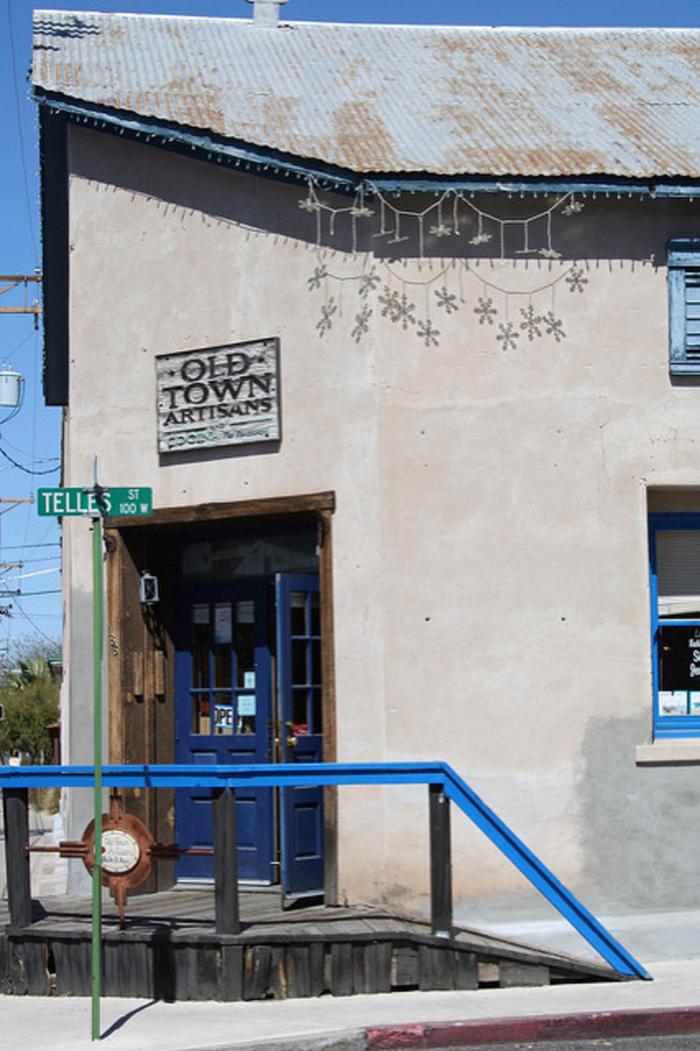 This quaint corner store sits on what used to be the Presidio’s stables area. Its north wall – facing Washington Street – is on the same line as the fort’s north wall. The store’s part of an adobe complex that was built the 1850s. Later, a liquor merchant bought it and

Mild year-round weather, breathtaking beaches and an outstanding range of aquatic activities and attractions, San Diego is the holiday dream on the Me

Want to explore a city that is a hub for celebrities, television, and movies? Los Angeles is an incredibly creative city rooted in its love for the ar

California's Danish oasis! Built from the hands and minds of an audacious group early 20th century migrants, the picturesque result will convince you